Technologies to remove carbon dioxide from the atmosphere

The Virgin Earth Challenge is a prize of $25m for whoever can demonstrate to the judges' satisfaction a commercially viable design which results in the removal of anthropogenic, atmospheric greenhouse gases so as to contribute materially to the stability of Earth’s climate.

Among the 11 shortlisted organizations are:
Above three technologies (biochar, carbon air capture and enhanced weathering) have great potential to help out with carbon dioxide removal (CDR) from the atmosphere. To combat global warming, further technologies should be considered, such as in Solar Radiation Management (SRM) and Arctic Methane Management (AMM).

How effective each technology is in one area is an important consideration; importantly, each such technologies can also have effects in further areas.

A safe operating space for humanity is a landmark 2009 study by Rockström et al. It identifies nine essential areas where sustainability is stressed to the limits, in three cases beyond its limits. 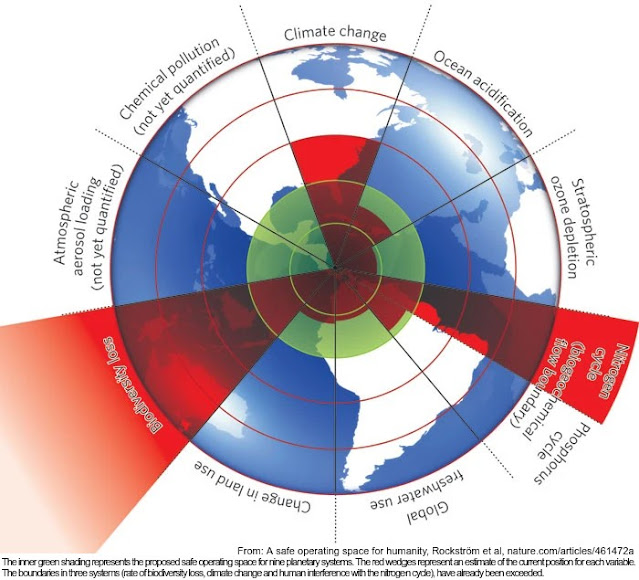 The table below shows these nine areas on the left, while technologies that could be helpful in the respective area feature on the right.

Similarly, algae bags located in the mouth of a river could help out in multiple areas. They could produce biofuel and thus help reduce aviation emissions, while in the process catching fertilizer runoff, thus reducing emissions of nitrous oxide (the largest ozone-depleting substance emitted through human activities in a 2009 NOAA study) and also reducing depletion of oxygen in oceans.


Implementing the most effective policies

Policy support for such technologies is imperative. Just like some technologies can help out in several areas, some policies can cover multiple areas. As an example, a policy facilitating a shift to cleaner energy can both reduce greenhouse gases and aerosols such as soot and sulfur. Sulfur reflects sunlight back into space, so reducing sulfur emissions results in more global warming, but conversely global warming can be reduced by releasing sulfur over water at higher latitudes.

How many different policies would be needed to support such technologies? What are the best policy instruments to use?

Traditionally, government-funded subsidies and standards have been used to contain pollution, sometimes complemented with levies and refundable deposits; this can also work for chemical pollution. Standards have also proven to be effective in reducing the impact of CFCs on the ozone layer, while - as said - policies could at the same time also be effective in other areas, in this case reducing the impact of CFCs as greenhouse gases.

However, standards don't raise funding for support of such technologies, while taxpayer-funded subsidies make everyone pay for the pollution caused by some. Hybrid methods such as cap-and-trade and offsets are prone to corruption and fraud, which compromises their effectiveness. Local feebates are most effective in facilitating the necessary shifts in many areas.

To facilitate the necessary shift away from fuel toward clean energy, local feebates are most effective. Fees on cargo and flights could fund carbon air capture, while fees on fuel could fund rebates on electricity produced in clean and safe ways. Fees could also be imposed on the engines, ovens, kilns, furnaces and stoves where fuel is burned, to fund rebates on clean alternatives, such as EV batteries and motors, solar cookers and electric appliances. Such feebates are pictured as yellow lines in the top half of the image below.

Support for biochar and olivine sand could be implemented through a second set of feebates, as pictured in the bottom half of the image below. Revenues from these feebates could also be used to support further technologies, as described in the paragraph below.

Further technologies should be considered for their effectiveness in specific areas, including: 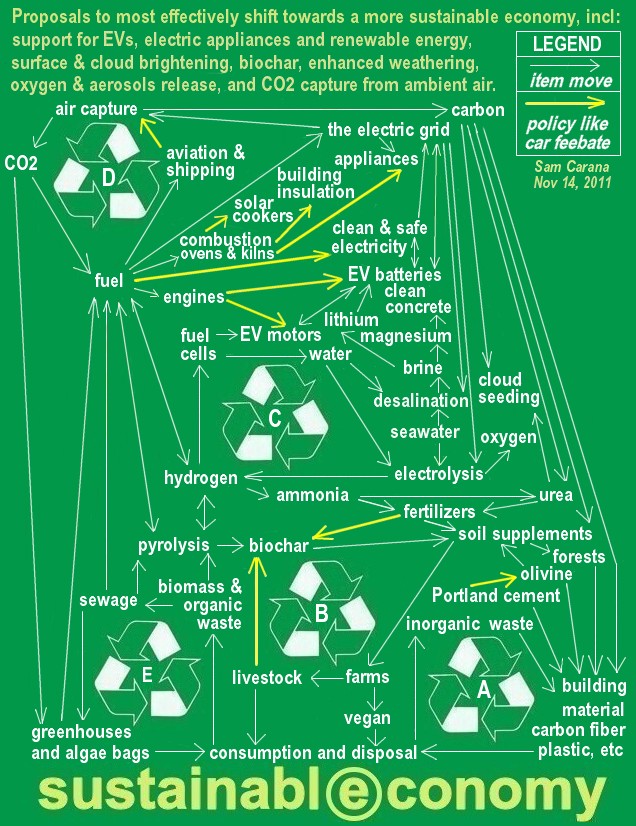 Dutch Professor Olaf Schuiling has been working on rock grinding for many years. Remember the Virgin Earth Challenge, launched early 2007 with the promise to award $35 million to the best method to remove greenhouse gases? Schuiling said: Let's grind more rocks! Last thing Schuiling heard was that he was among the final ten contenders.
Schuiling's method is simple. Crush olivine rock to small pieces and it will bind with carbon dioxide. This process - called weathering - happens in nature but takes a long time. Crushing and grinding olivine rock will speed up the process and is therefore often called enhanced weathering. It works best in wet tropical countries, but can be done everywhere around the world.
Schuiling proposes to cover beaches, levees and railway tracks with the material, and proposes olivine to be added to building materials like pavement and concrete. It can also be added to soil and water. Adding olivine can fertilize the soil and improve its ability to retain water, and can work well in combination with biochar and other ways to increase organic carbon in the soil. When added to the sea, it can reduce acidification, and stimulate growth of diatoms and other forms of biomass in the sea.
This is a win-win solution, Schuiling says, as it helps grow more food, while combating global warming. To add another win, it can also produce drinking water that is healthier than rain water. Schuiling recommends cities to build olivine hills, to remove carbon dioxide from the air while filtering water.
There's is a video with more background, in Dutch with English subtitles. Also have a look at this poster. 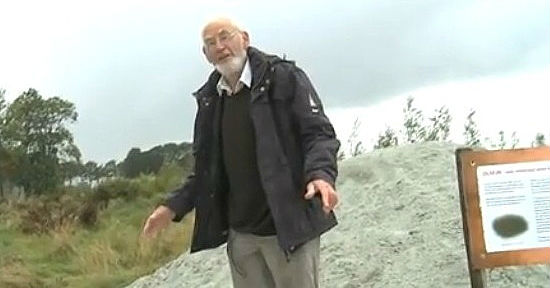 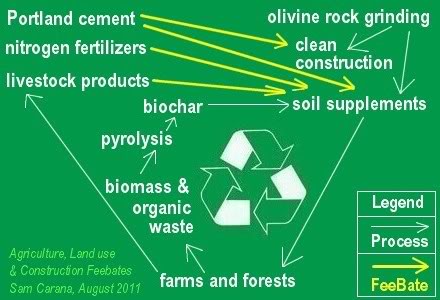 What works best is implementation of feebates that put in place combinations of local financial incentives and disincentives, as illustrated by the image on the right.

Rock grinding should be part of a comprehensive policy that also includes replacing fuel with renewable energy and support for biochar. The latter is also discussed in the posts Biochar and The Biochar Economy.

As the above diagrams try to show, biochar and olivine sand can be combined in soil supplements, to help bring carbon dioxide levels in the atmosphere back to 280ppm. Rebates could be financed from fees on nitrogen fertilizers, livestock products and Portland cement.

Enhanced weathering is possible with other types of rock, but more easily done with olivine. The paper Olivine against climate change and ocean acidification includes the map below with the global distribution of dunite massifs. By removing their lateritic overburden, the underlying dunites (rocks that consists of > 90% olivine) can be mined. 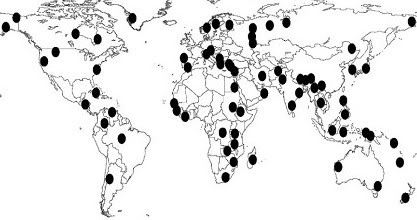 As the image on the right shows, there's no need for long distance transport. One dot often represents several dunites and olivine is available in abundance at many places across the globe.

The benefits are great and this looks like one of the most economic ways to bring down carbon dioxide levels.
The energy can come from wind energy, which is clean, price-competitive and available in abundance in many places. Rock grinding, the transport and distribution can be largely automated, and take place predominantly at off-peak hours, while wind energy can be supplied very economically at off-peak hours.

Olivine sand can also be combined well with biochar, as soil supplement. Have a look at the post the Biochar Economy. 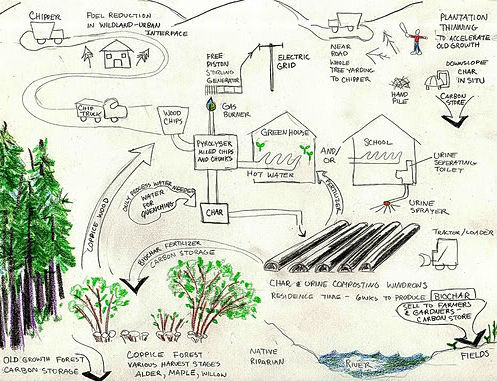