Many of the graphs relating to global warming are exponential, rather than linear. The amount of carbon dioxide in the atmosphere is rising at accelerating speed, unlike anything that has been seen in history. This in itself is sufficient reason for alarm. Additionally, there are scenarios in which the combination of several tipping points can lead to a runaway greenhouse gas effect that feeds on itself through positive feedback mechanisms. For an example, read about the Clathrate Gun Hypothesis.

For decades, people have warned about this. Back in the early 1990s, a poll of the world's leading climatologists showed that many feared that the greenhouse effect could be unstoppable if emissions of polluting gases were merely frozen and not cut. In December 1991, Greenpeace asked 400 climate scientists if they thought the greenhouse effect might reach the point of no return in the near future. Of the 113 scientists who returned their questionnaires, almost half thought a runaway greenhouse effect is possible, and 13 per cent thought it probable.

James Hansen, who heads the NASA Goddard Institute for Space Studies, recently said that human activity is causing greenhouse gas levels to rise so rapidly that his model suggests there is a risk of a runaway greenhouse effect, ultimately resulting in the loss of oceans and of all life on the planet: "In my opinion, if we burn all the coal, there is a good chance that we will initiate the runaway greenhouse effect. If we also burn the tar sands and tar shale (a.k.a. oil shale), I think it is a dead certainty."

I discussed this danger in the article Venus' runaway greenhouse effect a warning for Earth, originally posted and discussed at Gather.

Even if the risk of such scenarios occurring on Earth were small, it makes sense to do the following:

What evaluation criteria can be used in above comparative analysis? Here are some suggestions:

SCIENCE
Existing studies - Are relevant studies available? Has there been any peer-review?
Further study - What further studies and modeling are required?
Effectiveness - How effective will the proposal be in reducing global warming?
Timescale - How long will it take to see results?
Concerns - What are possible climate risks, side-effects, dangers?

ECONOMICS
Cost - Are there estimates as to what (each of the various stages of) implementations would cost?
Financing - How could the project be financed? Is there any backing for the project?
Resources - Will there be access to the various resources needed to make it work?
Impact - What will be the economic impact? Who will profit from the project?

POLITICS
Approval - What kind of approvals are needed to go ahead?
Subsidies - Are subsidies required for impact studies, feasibility studies or for specific parts of the project?
Policy - How does the project fit in with specific policies, e.g. offset policies, emissions trading or feebates?
Legal - Does it require new laws or amendment of existing laws? Can legal challenges be expected?
Diplomacy - Would the project require international negotiations between nations?
Administration - From where will the project be administered?

SOCIAL AND MEDICAL
Support - Is there public support for, concern about or resistance against the project?
Consultation - Who will benefit, who could be harmed? Has the public been consulted?
Control - What level of policing, supervision and security is needed? What monitoring is needed?
Medical - Would the project pose safety and health concerns?
Cultural - Does the project offend some people in some way?

ENVIRONMENT
Impact study - Has an environmental impact assessment been done? Are further studies required?
Maintenance - Is any monitoring, maintenance or restoration required, to prevent environmental damage?


The above points could give some indication as to how hard it will be to implement a proposed project. Projects could be scored on each point by asking whether this point will raise any difficulties for the respective project. A high score would indicate that little or no difficulty on this point can be expected for the project, while a low score would indicate that the project can be expected to have difficulty on this point.

Each point could be given a specific weighting, resulting in overall score for each of the projects. The higher the overall score, the more the project should be of interest to members of this group. A high overall score should indicate that there is sufficient confidence that the project is safe, effective, feasible, viable, etc, with little or no concern, risk or danger that things could go wrong or that a proposal could cause damage or harm in some way.

Importantly however, this should not be seen as a race where only one winner is selected. It is prudent to encourage diversity in approach and to continue to study multiple ideas and suggestions in parallel. I encourage others to suggest additions and changes to this post.

"We all hope that things will turn out right, but we must think about what to do, in case it doesn't!"

The collective brain of New Scientist has come up with 8 scientist heroes of the year, including:

Caldeira, of the Carnegie Institution, has been investigating geoengineering claims for years. This year he was brought in by the British government to talk about ways in which we could geoengineer the climate to save us from global warming. If we don't get greenhouse gas emissions down, we're going to need a Plan B - and people like Caldeira to do the research for us. He's also been asked to organise a session on geoengineering in Copenhagen next year, where world leaders will meet to sign the successor to the Kyoto protocol.

Engineers Takayuki Toyama of company Avix Inc in Kanagawa, Japan, and Alan Stainer of Middlesex University Business School, London, UK, suggest that, to combat global warming, heat-reflecting sheets could be installed in arid areas. This would not only reflect much of the sun's heat back into space, but could also help fight desertification. They add that the same approach might also be used to cover areas of the oceans to increase the Earth's total heat reflectivity.

The team's calculations suggest that covering an area of a little more than 60,000 square kilometres with reflective sheet, at a cost of some $280 billion, would result in net cooling, if there would be no reduction in carbon dioxide emissions.

To combat global warming, wind turbines along the coastline could be used for the dual purposes of generating electricity at times when there is wind and evaporating water at times when there is no wind. Just a small breeze over the water can give the top water molecules enough kinetic energy to overcome their mutual attraction, resulting in evaporation of water and associated cooling of both water and air.

The evaporation will give some cooling effect, but the real impact on global warming will come from albedo change. When there's much wind at night, offshore wind turbines could produce more energy than is needed on the grid. Such surplus power could be stored and - at times when there's little wind - used to pump up sea water and have this sprayed by the turbines as a fine mist over the water. This spray will contain tiny particles of sea-salt that get sucked up into the air, especially when there's little wind and sunshine causes rising currents of air. These little salt particles will attract further droplets of water from the surrounding air, forming clouds that are lighter in color from space than sea water (see albedo comparison below, from Wikipedia). 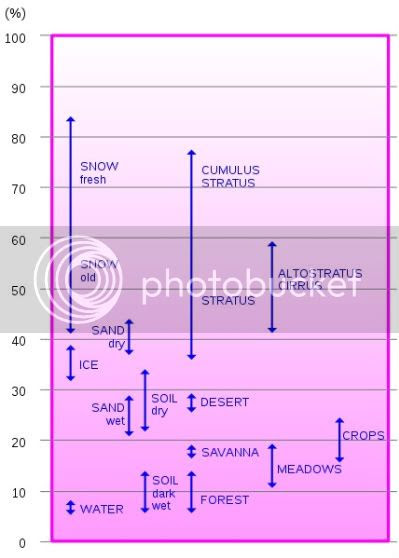 In early 2006, I wondered to what extent such increased cloud coverage could mitigate global warming. On the one hand, the extra clouds will reflect more sunlight back into space, but on the other hand water vapor is itself a greenhouse gas. While the albedo difference between clouds and sea water is obvious, some of the evaporated water could rise higher up into the atmosphere and increase humidity of cirrus clouds at high
altitudes, thus trapping the heat underneath and heating up Earth even further through the greenhouse effect. Also, such evaporation could cause unwanted salty rain to fall over land.