Solar and wind power in the sky 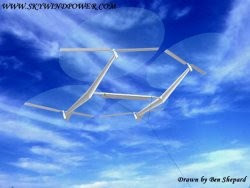 Solar panels and wind turbines only work when there is sufficient sunshine or wind. There are ways to overcome this disadvantage, such as storing the surplus electricity generated on sunny and windy days by pumping up water from a lower to a higher lake, to regain this energy as hydro-electricity later. Alternatively, car batteries could be charged when there is abundant electricity, to sell power back to the grid at better prices when there is high demand.

Another approach is to seek and harvest solar or wind power at locations where there is more permanent wind or sunshine. Wind turbines could be located in the sky. Bryan Roberts, professor of engineering at the University of Technology, Sydney, proposes clusters of wind turbines flying 15,000 feet high in the air. After studying the topic for 25 years, Roberts designed a helicopter-like rotorcraft to hoist a wind turbine high into the air, where winds are persistent and strong. Once there, the wind turbine is powered by its own electricity and keep itself in place, while transmitting electricity to the ground through a cable. Roberts has teamed up with San Diego-based Sky Windpower, which plans to produce a flying wind turbine with four rotors. The rotorcraft will go into the first layer of the atmosphere, called the troposphere. With GPS technology, the crafts can be kept in position to within a few feet.

Instead of using a cable to transport electricity down to the ground, electricity could also be tranferred through microwaves. Decades ago, Dr. Gerard K. O'Neill proposed to locate solar panels in space where solar power would be converted to low-density radio waves, sent to Earth and converted to electricity. O'Neill proposed this as part of a wider plan to colonize space. A publication by William Brown shows that the technology to transmit electricity by radio waves with a high degree of efficiency was already used as far back as in 1965.

Wow Energies a contender for Branson $US25 million award

As discussed, Richard Branson encourages companies to come up with solutions by offering a $US25 million award to anyone who can take existing carbon dioxide and other greenhouse gases out of the atmosphere.

An earlier post mentioned Klaus Lackner, physicist at Columbia University, who proposes artificial trees to suck carbon out of the air. The trees suck in carbon dioxide for storage under the ocean-floor in disused oil or gas fields.

Another contender for this award and working along similar lines is Wow Energy, a Texan company that builds equipment to clean the air from pollutants. They originally developed their technology to provide a cleaner process at the point
of emission, e.g. when burning fossil fuel at a power plant ("clean coal"). Note that the Branson award is to clean ambient air from greenhouse gas emissions, as opposed to scrubbing done at power plants or through filters in cars, but if it works well for ambient air then that would be great. For more details, go to Wow Energies