How to avoid mass-scale death, destruction and extinction

Climate change threatens to develops in four ways:
Warming accelerates in the Arctic due to a number of feedbacks, ten of which are depicted in the Diagram of Doom.

One of these feedbacks, methane releases from the Arctic seabed, constitutes a point-of-no-return, in that this threatens to trigger further releases in a vicious cycle that will escalate into runaway global warming. The combined impact of land degradation, storms and heatwaves will then cause crop and vegetation loss at unprecedented scale, resulting in mass death, destruction and extinction.

High food prices have been around for a few years, as illustrated by the FAO Food Price Index below (see interactive version of this image). 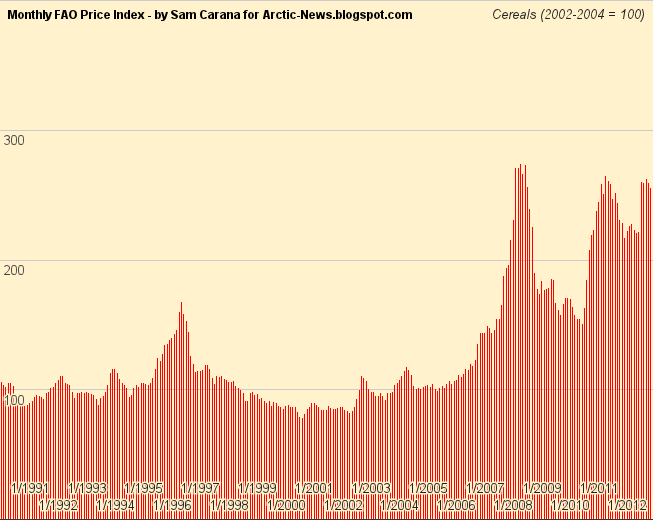 The FAO, in its recent Cereal Supply and Demand Brief, explains that we can expect prices to rise, as illustrated below.

The Economic Research Service of the U.S. Department of Agriculture mentions, in its Food Price Outlook, 2012-2013, that the "drought has affected prices for corn and soybeans as well as other field crops which should, in turn, drive up retail food prices".

Global food supply is under stress as extreme weather becomes the new norm. Farmers may be inclined to respond to drought by overusing ground water, or by slashing and burning forest, in efforts to create more farmland. Such practices do not resolve the problems; instead, they tend to exacerbate the problems over time, making things progressively worse.

The diagram below shows that there are many climatological feedbacks (ten of which are named) that make climate change worse. At the top, the diagram pictures vicious cycles that are responses by farmers that can add to make the situation even worse. Without effective action, the prospect is that climate change and crop failure combine to cause mass death and destruction, with extinction becoming the fourth development of global warming.

The most effective action will target causes rather than symptoms of these developments.

Part 1. Since emissions are the cause of global warming, dramatic cuts in emissions should be included in the first part of the responses. In addition, action is needed to remove excess carbon dioxide from the atmosphere and oceans. Storing the carbon in the soil will also improve soil quality, as indicated by the long green arrow on the left.

Part 2. Solar radiation management is needed to cool the Arctic.

Part 3. Methane management and further action is needed, e.g. to avoid that methane levels will rise further in the Arctic, which threatens to trigger further releases and escalate into runaway global warming. Measures to reduce methane can also benefit soil quality worldwide, as indicated by the long green arrow on the right.

Thus, the proposed action tackles the prospect of mass death and extinction by increasing soil fertility, as illustrated by the image below. 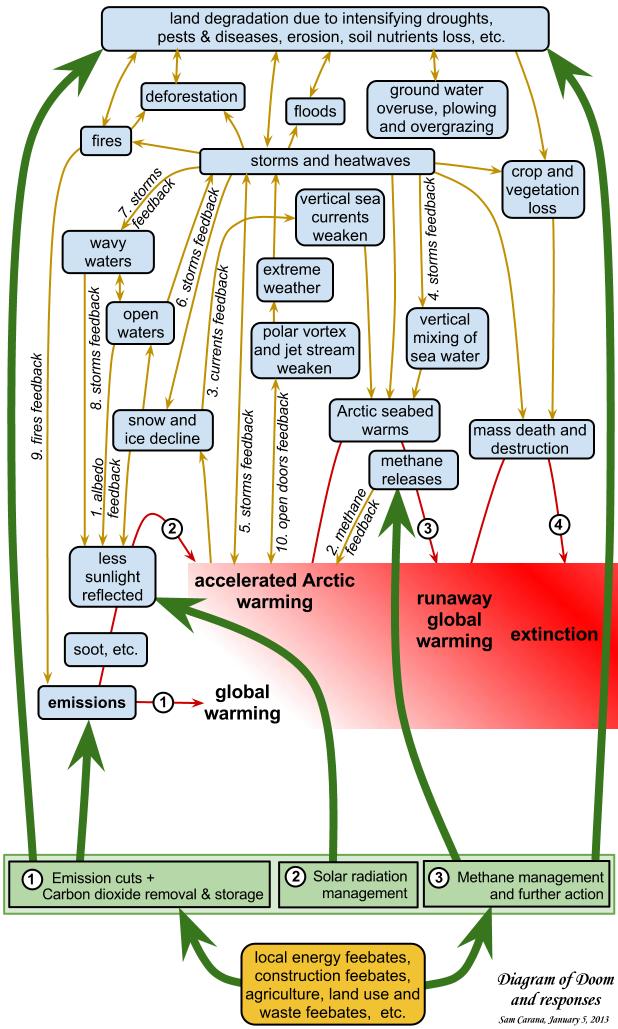 Depicted at the bottom of the image are the most effective policies to accomplish the goals set out in the proposed 3-part plan of action, i.e. feebates, preferably implemented locally. Cost associated with solar radiation management is relatively small, so relatively small fees, e.g. on commercial international flights could raise the necessary funding.
Posted by Sam Carana at 1/05/2013 09:04:00 PM No comments: