Air capture of carbon dioxide is an essential part of the blueprint to reduce carbon dioxide to acceptable levels. Fees on conventional jet fuel seem the most appropriate way to raise funding to help with the development of air capture technology.

Why target jet fuel? In most other industries, there are ready alternatives to the use of fossil fuel. Electricity can be produced by wind turbines or by solar or geothermal facilities with little or no emissions of greenhouse gases. In the case of aviation, though, the best we can aim for, in the near future at least, is biofuel.

Technically, there seem to be no problems in powering aircraft with biofuel. Back in Jan 7, 2009, a Continental Airlines commercial aircraft (a Boeing 737-800) was powered in part by algae oil, supplied by Sapphire Energy. The main hurdle appears to be that algae oil is not perceived as price-competitive with fossil fuel-based jet fuel. 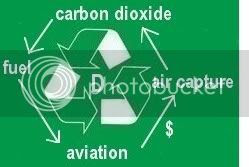 Algae can grow 20 to 30 times faster than food crops. A CNN report, more than a year ago, mentions Vertigro's claim to be able to grow 100,000 gallons of algae oil per acre per year by growing algae in clear plastic bags suspended vertically in a greenhouse. Given the right temperature and sufficient supply of light, water and nutrients, algae seem able to supply an almost limitless amount of biofuel.

The potential of algae has been known for decades. As another CNN report describes, the U.S. Department of Energy (DoE) had a program for nearly two decades, to study the potential of algae as a renewable fuel. The program was run by the DoE's National Renewable Energy Laboratory (NREL) and was terminated by 1996. At that time, a NREL report concluded that an area around the size of the U.S. state of Maryland could cultivate algae to produce enough biofuel to satisfy the entire transportation needs of the U.S.

In conclusion, it would make sense to impose fees on conventional jet fuel and use the proceeds of those fees to fund air capture of carbon dioxide. 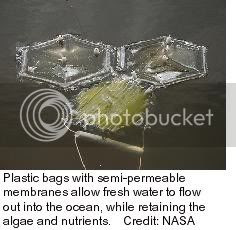 Apart from growing algae in greenhouses, we should also consider growing them in bags. NASA scientists are proposing algae bags as a way to produce renewable energy that does not compete with agriculture for land or fresh water. It uses algae to produce biofuel from sewage, using nutrients from waste water that would otherwise be dumped and contribute to pollution and dead zones in the sea.

The NASA article conservatively mentions that some types of algae can produce over 2,000 gallons of oil per acre per year. In fact, most of the oil we are now getting out of the ground comes from algae that lived millions of years ago. Algae still are the best source of oil we know.

In the NASA proposal, there's no need for land, water, fertilizers and other nutrients. As the NASA article describes, the bags are made of inexpensive plastic. The infrastructure to pump sewage to the sea is already in place. Economically, the proposal looks sound, even before taking into account environmental benefits.

Jonathan Trent, lead research scientist on the Spaceship Earth project at NASA Ames Research Center, Moffett Field, California, envisages large plastic bags floating on the ocean. The bags are filled with sewage on which the algae feed. The transparent bags collect sunlight that is used by the algae to produce oxygen by means of photosynthesis. The ocean water helps maintain the temperature inside the bags at acceptable levels, while the ocean's waves also keep the system mixed and active. 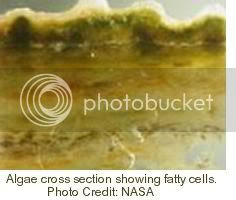 The bags will be made of “forward-osmosis membranes”, i.e. semi-permeable membranes that allow fresh water to flow out into the ocean, while preventing salt from entering and diluting the fresh water inside the bag. Making the water run one way will retain the algae and nutrients inside the bags. Through osmosis, the bags will also absorb carbon dioxide from the air, while releasing oxygen. NASA is testing these membranes for recycling dirty water on future long-duration space missions.

As the sewage is processed, the algae grow rich, fatty cells that are loaded with oil. The oil can be harvested and used, e.g., to power airplanes.

In case a bag breaks, it won’t contaminate the local environment, i.e. leakage won't cause any worse pollution than when sewage is directly dumped into the ocean, as happens now. Exposed to salt, the fresh water algae will quickly die in the ocean.

The bags are expected to last two years, and will be recycled afterwards. The plastic material may be used as plastic mulch, or possibly as a solid amendment in fields to retain moisture.

A 2007 Bloomberg report estimated that the Gulf of Mexico's Dead Zone would reach more than half the size of Maryland that year and stretch into waters off Texas. The Dead Zone endangers a $2.6 billion-a-year fishing industry. The number of shrimp fishermen licensed in Louisiana has declined 40% since 2001. Meanwhile, U.S. farmers in the 2007 spring planted the most acreage with corn since 1944, due to demand for ethanol. As the report further describes, the Dead Zone is fueled by nitrogen and other nutrients pouring into the Gulf of Mexico, and corn in particular contributes to this as it uses more nitrogen-based fertilizer than crops such as soybeans.

The Louisiana coast seems like a good place to start growing algae in bags floating in the sea, filled with sewage that would otherwise be dumped there. It does seem a much better way to produce biofuel than by subsidizing corn ethanol.

According to zFacts.com, corn ethanol subsidies totaled $7.0 billion in 2006 for 4.9 billion gallons of ethanol. That's $1.45 per gallon of ethanol (or $2.21 per gallon of gas replaced). As zFacts.com explains, besides failing to help with greenhouse gases and having serious environmental problems, corn ethanol subsidies are very expensive, and the political backlash in the next few years, as production and subsidies double, will damage the effort to curb global warming.

At UN climate talks in Bonn, the world's poorest nations proposed a levy of about $6 on every flight to help them adapt to climate change. Benito Müller, environment director of the Oxford Institute for Energy Studies and author of the proposal, said that air freight was deliberately not included. The levy could raise up to $10 billion per year and would increase the average price of an international long-haul fare by less than 1% for standard class passengers, but up to $62 for people traveling first class.

In the light of those amounts, it doesn't seems unreasonable to expect that fees imposed on conventional jet fuel could raise billions per year. Proceeds could then be used to fund rebates on air capture of carbon dioxide, which could be pumped into the bags on location to enhance algae growth. Air capture devices could be powered by surplus energy from offshore wind turbines. With the help of such funding, the entire infrastructure could be set up quickly, helping the environment, creating job opportunities, making the US less dependent on oil imports, while leaving us with more land and water to grow food, resulting in lower food prices. 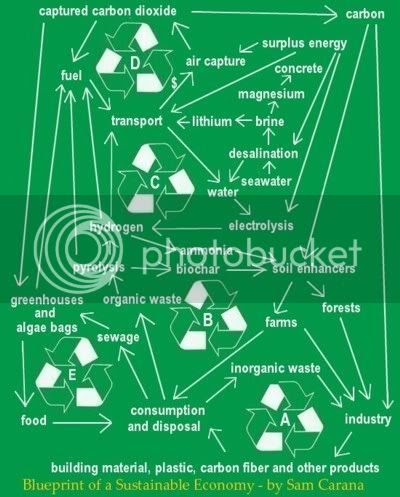