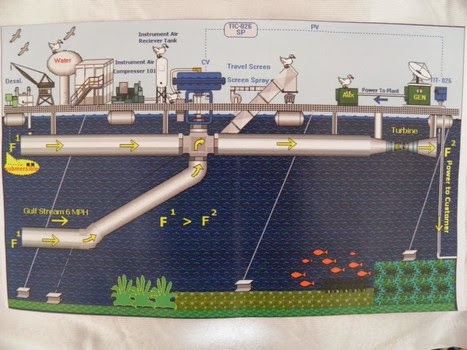 Ocean tunnels are proposed by Patrick McNulty as a way to combat global warming. Many of these tunnels, lined up across the Gulf Stream and the Kuroshio Current, could supply large quantities of clean energy to the North American East Coast and to East Asia.

Such tunnels can supply energy continuously, i.e. 24 hours a day, all year, making them suitable to supply base load energy as currently generated by coal-fired power plants and nuclear power plants.

Ocean tunnels thus hold the potential to supply huge amounts of clean energy and facilitate a rapid move to a sustainable economy, as part of the comprehensive and effective action needed to combat climate change. This is pictured in the image below under part 1.


Ocean Tunnels can be combined with Ocean thermal energy conversion (OTEC) methods that use the temperature difference between cooler deeper parts of the ocean and warmer surface waters to run a heat engine to produce energy. Once such a system is in place, it has access to both deeper parts of the ocean and to surface waters, while generating a lot of energy. Such a system can also be used to pull up sunken nutrients from the depth of the ocean and put them out at surface level to fertilize the waters there, while the colder water that is the output of OTEC will float down, taking along newly-grown plankton to the ocean depths before it can revert to CO2, as described in the earlier post Using the Oceans to Remove CO2 from the Atmosphere.

Additionally, tunnels also hold the potential to divert warm water elsewhere and to move colder water into places that could otherwise get too warm, i.e. part 2. (Heat management) of the above action plan, more specifically management of water temperature.

Tunnels could be shaped to guide the flow of water into a specific direction, which could divert some of the water that is currently going into North Atlantic Current towards the Arctic Ocean down a southwards course along the Canary Current along the coast of West Africa.

Thus, tunnels could both produce energy to pump water elsewhere, or to pump water onto the sea ice and glaciers, to thicken the ice, or to pump sea water up into the air to spray it around and create clouds. The energy could be used in projects to help reduce temperatures in the Arctic. Additionally, tunnels could also be shaped in ways to guide water, which works even when no energy is generated. Tunnels is a concept with many applications and testing and further studies will show which applications are attractive.

A comprehensive action plan will need to consider a wide range of action. A warming Arctic results in changes to the Jet Stream, in turn making that more extreme weather can be expected, as illustrated by the video below, by Paul Beckwith.

In July 2013, water off the coast of North America reached 'Record Warmest' temperatures and proceeded to travel to the Arctic Ocean, where it is still warming up the seabed, resulting in huge emissions of methane from the Arctic Ocean's seafloor.
Diversion of ocean currents could reduce warming of the waters in the Arctic. As the image below shows, warm water is carried by the Gulf Stream all the way into the Arctic Ocean. 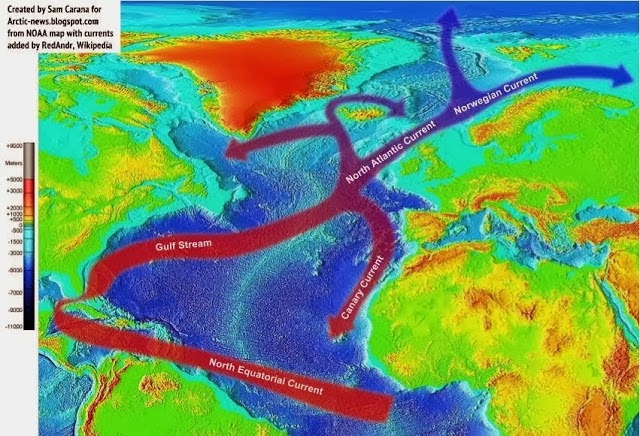 Warming up of the waters in the Arctic is threatening to cause release of huge quantities of methane that is held in sediments under the seabed, as discussed in the post Quantifying Arctic Methane.

This looks like a very important concept and method of lowering global greenhouse gas levels. Anyone who wants to discuss it can call me at 516-921-5058
Neil Farbstein
president Vulvox inc
http://vulox.tripod.com

We certainly have the biggest floods in Somerset UK.

Sounds like a global radiator for the deep ocean. If that's what it take to turn the global greenhouse around before blows a methane fuse and goes deadly hyper on us then lets start testing it out right now. Seems pretty benign to me but I've been easily fooled in the past.