Here are three ideas to supply Europe with electricity:

In April 2007, the Icelandic National Energy Authority signed a deal with Energie Baden-Wuerttemberg from Germany, to work on electricity being transmitted to Germany from Iceland. A 1,200-mile ocean-floor cable is envisaged to carry electricity to Britain’s national grid before reaching Germany. The proposal is to drill 3.8km through the Earth's crust into the hot basalt below, in order to tap into temperatures of up to 600C and generate enough geothermal electricity to power up to 1.5 million homes in Europe.

The Grand Inga power station is a project to harness hydropower of the Congo River. Located near the mouth of the Congo River, with an output of 39,000 megawatts, Grand Inga would be the world's biggest hydroelectric scheme, generating twice the power of China's Three Gorges dam.

Three electricity superhighways would deliver power south to Angola, Botswana and South Africa, west towards Nigeria and north to Egypt and - ultimately - southern Europe. The project might cost $US80billion, but power delivered from Grand Inga to the Italian border would cost less than the current market price of electricity in Italy today.

The Trans-Mediterranean Renewable Energy Cooperation (TREC) was founded in September 2003. One proposal is for Thermal Solar Power to be generated in the deserts of Africa, for transmission by means of High-Voltage Direct Current cables to Europe, with losses of only about 3% per 1000 km, adding up to losses across the Mediterranean of 10-15% to Europe. 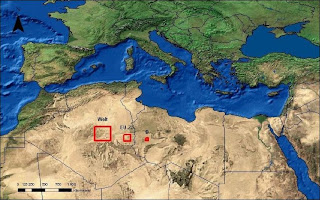 The above picture below is from:
http://en.wikipedia.org/wiki/Image:Fullneed.jpg

The red squares on the image represent the theoretical space needed for solar power plants to generate sufficient electric power in order to meet the electricity demand of respectively the World, Europe (EU-25) and Germany, based on data from a study by the German Center of Aerospace (DLR), P. 12 bzw. 26, 2005.

Curtis Struck of Iowa State University suggests that lunar dust particles are just the right size to scatter sunlight. They could be positioned in the Moon's orbit in a pair of stable clouds that would each pass in front of the Sun once a month, blocking sunlight for about 20 hours each month (Journal of the British Interplanetary Society, vol 60, p 1).

Planktos - seeding the oceans with iron

Planktos plans to fertilise the oceans with iron to stimulate growth of phytoplankton, microscopic marine plants that soak up carbon dioxide. Their ship plans to dissolve tons of iron over a 10,000-square-kilometer patch.

Cloud seeding is proposed by John Latham and Stephen Salter, who suggest to spray droplets of seawater high up into the air, so that the tiny particles of salt from these droplets will make clouds thicker and more reflective. The project featured prominently in the BBC documentary:
Five Ways To Save The World

Stephen Salter proposes to make rain with floating wind turbines that make very choppy waves, known as Faraday waves. A high-frequency ultrasonic generator would spin seawater around inside a grooved drum, producing tiny waves that are thinner than a human hair, throwing tiny droplets of water from their crests up into the air. As this fine mist of sea-spray evaporates, tiny particles of sea-salt remain in the air and get sucked up into the air, especially when the sunshine causes rising currents of air. These little salt particles act as centres attracting extra droplets to form darker clouds further up in marine stratocumulus clouds. Stephen envisages a multitude of ships to criss-cross the oceans, remotely controlled with their position tracked through GPS and their destination determined by wheather patterns. This idea of making rain in this way could also be combined with another idea discussed earlier in this group, i.e. of exploiting temperature differences in the sea. http://groups.google.com/group/greenhouseeffect/msg/4a21d06ae5b08c04

The deeper you go down into the ocean, the colder it gets. At the lowest points, the temperature is near freezing point. Ships could drag a pipe along, reaching down a few hundred metres into the ocean. Through this pipe, cold water could be pumped up by a solar-powered pump to be released back into the sea from a little tower of, say, two metres high. As the cold water falls down into the sea, the evaporation will act as an air-conditioner. Furthermore, condensation around the top of the pipe will drip down and can be captured in containers, to be sold as fresh water. So, apart from harvesting clean, potable water in the above way, such a ship could also be anchored at a location where it could throw part of the seawater up into the air in the way Stephen Salter proposed, as a fine mist, in order to produce more rain in the proximity of a dry area on land.
Sam Carana - Tabling ideas - From Rainmaking to Sunshields - March 3 2006

Sulphur into the stratosphere

It's well worth considering releasing dust particles in the air to reflect some of the sunlight, as an alternative to positioning mirrors in orbit above Earth. [There are] a few problems with the dust-particles approach, such as difficulties in regulating the right amount of dust. It may turn out that - in hindsight - too many dust-particles have been released in the atmosphere and that it will be quite a problem getting them out again. Another problem is that the dust-particles method will affect the climate everywhere on earth.
Sam Carana - Vital Signs 2005- Vital Facts - May 20 2005

One such proposal is by Paul Crutzen, who won the Nobel Prize for chemistry when he discovered the causes of the hole in the ozone layer. Paul proposes to shoot hundreds of rockets loaded with tons of sulphur into the stratosphere to create a vast, but very thin sunscreen of sulphur around the earth. The proposal was discussed in the BBC documentary:
Five Ways To Save The World

Klaus Lackner, physicist at Columbia University, has proposed artificial trees to suck carbon out of the air. The trees suck in carbon dioxide for storage under the ocean-floor in disused oil or gas fields.

Such trees could be planted anywhere. A small one could sit like a TV on the lawn to balance out the CO2 emitted by one person or family. A large tree, the size of a barn, could sit in the open air, near repositories for easy transportation and storage of carbon. Klaus Lackner estimates that some 250,000 such trees worldwide would be needed to soak up the CO2 produced by human activity annually.
BBC News, 21 February 2003
Earth Institute at Columbia University
Amazon.com News

The concept Mirrors in Space was discussed in an article from the summer 2001 Whole Earth Review, Mirrors & Smoke: Ameliorating Climate Change with Giant Solar Sails,
by Kenneth I. Roy, PE and Robert Kennedy, PE.

Over the years, the concept has been discussed in many posts, including in the geo-engineering group by Sam Carana

The ABC show, Good Morning America, on January 29, 2007, featured a clip on mirrors in space, featuring a proposal by Roger Angel, University of Arizona, to send many small discs into space to form giant mirrors deflecting some of the sunlight from Earth.

Roger Angel's research into the feasibility of cooling the Earth with a cloud of small spacecraft near the inner Lagrange point (L1) has been discussed at:
National Academy of Sciences
National Institues of Health
Sciencenews.org
Roland Piquepaille

In February 2007, airline tycoon Richard Branson announced a $25 million prize for the most innovative solution to get greenhouse gases out of the atmosphere in the battle against global warming.

Former Vice President Al Gore and Virgin CEO Richard Branson talk with Harry Smith about the prize in the interview below.

Thirty years ago, Stephen Salter designed a floating canister that captured wave power by driving a generator from the motion of bobbing up and down on the waves.

Since that time, a lot of water has flowed under the bridge and many prototypes have been made.

Four students at University of British Columbia worked for four months on a prototype that makes 15 Watts of energy in 10 inch high waves.


Here's a video called Taming the waves, about a project in Cornwall (UK)


Another video shows a device by Solarist


This video by SwellFuell shows a device coined Pandorra's box that uses a flywheel to get a more continuous flow of electricity.


And here's another one:

Turbines inside a huge Solar Tower

Instead of relying on solar cells, the tower acts like a giant greenhouse. The sun's energy is harnessed to create warm air currents that will drive a series of power generating turbines inside the tower. Located under the glaring sun of the Australian outback, the 50 megawatt pilot project will stand taller than Chicago's Sears Tower and sit 260 feet in diameter at the base. The capacity for the technology is far greater though, and has gained the attention of Chinese investors. In 2002, Xiang Jiang Industrial became EnviroMission's second largest shareholder and plans to build a 200 megawatt tower in Shanghai, China.