How would you allocate US$10 million per year to most reduce climate risk?

Imagine that you had a budget of $10 million per year and that you should maximize the amount of climate risk reduction obtainable with that $10 million, what would you allocate it to and why?

Given the scary situation in the Arctic, I would apportion parts of the $10 million to methods that promise immediate results:
At first, as a test, two such small aircraft could navigate on auto-pilot to the north of Canada and Alaska at the start of Spring on the Northern Hemisphere.

In subsequent years, numerous such planes could follow, also going to other parts of the Arctic. At the end of Summer, the planes could return home for a check-up and possible upgrade of the technology, to be launched again the next year.

There are many self-financed clubs where members build and fly remote controlled aircraft, as discussed in comments underneath this post.

Even a small financial incentive could help such clubs make a lot progress and give them a goal, while the publicity would also make people more aware of the problems we face in the Arctic. 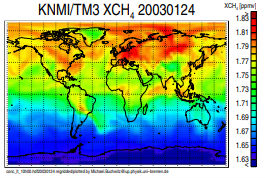 Such aircraft could navigate the Arctic, guided by satellite detection of methane concentrations (image left) and by equipment carried onboard, such as small versions of methane analyzers.

Measuring from different vantage points can pinpoint the most suitable location to cross-aim multiple laser beams at, to minimize the energy needed to heat up methane to its point of auto-ignition (image below). 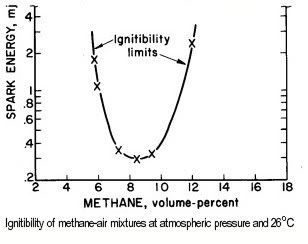 At well over 500 degrees Celsius, methane's minimum auto-ignition temperature is rather high. Other volatile hydrocarbons in the vicinity may ignite at lower temperatures (with less energy), in turn igniting the methane.

For further background on the above, also see:
http://geo-engineering.blogspot.com/2011/04/runaway-global-warming.html
and
http://groups.google.com/group/geoengineering/browse_thread/thread/5eaf812314dced8c

Very good stuff, the closer we move towards methane release, the more geoengineering will become main stream. I thought large scale methane ignition couldn't work, but if it could, it could buy precious time to remove billions of tons of CO2 from the atmosphere.

Short term geoengineering to prevent the worst of the "methane gun" is important in the utmost, and it needs to be combined with long term CCS and Carbon scrubbers.

If the Methane can be ignited, captured, or changed into CO2, then that allows humanity another small window of time to capture the carbon.

Dr. Klaus Lauckner of Kilimanjaro energy has been working up to a prototype that can scrub 365-90,000 tons of C02 from the atmosphere per year.

To read more about it, check out this "mainstream" National Geographic article:
http://ngm.nationalgeographic.com/big-idea/13/carbon-capture

If the methane in the artic can be changed to CO2, and MASS CO2 capture can be implemented on an unprecedented global scale, then humanity has a chance at survival.

Soil bacteria eat methane. Forests are the greatest creators of soil bacteria, as is an agriculture that focuses on soil fertility. We are killing our soil bacteria with chemical agriculture and need to move to an agro-forestry where strips of forest are interspersed with strips of cropland and use organic methods of encouraging soil bacteria. These two issues may seem totally separate, but they are not. You can throw all the technology at methane that you want, but if we don't rescue our planet's soils, we are fighting a losing battle.

I'm generally with Ivy in that I'd allocate the funds towards whatever it takes to generate more awareness and incentives for improved land management practices leading to soil carbon capture and rebuilding of the soil in general. Perhaps soil carbon capture isn't "sexy" enough to grab the attention of journalists and policy makers, and it doesn't even get enough attention in academia. What can be achieved through proper land management is astonishing. It requires no new deployment of risky technologies (and their unintended consequences), it increases long term sustainability of agriculture, increases the land's productivity, and reverses many of the ecological consequences of industrial agriculture. The primary input needed is human effort, a change in behavior and attitudes.